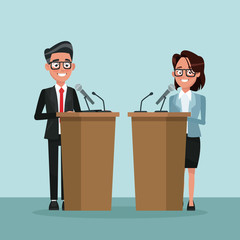 The recent leg of the Gauteng PMO Forum, supported by Project Portfolio Office, featured a lively conversational buzz as some 80 PMO leaders and executives took part in a multi-question debate. Three topical issues in the current project and portfolio management (PPM) space were presented, and after a brief introduction of each to set the scene, it was ‘G for go!’ on The Great Debate, the last event of this year in the popular series.

The Gauteng PMO Forum, under the umbrella of the Project Management South Africa (PMSA) association, is an invitation-only quarterly forum that provides an opportunity for PMO leaders and executives to network with peers across industries and share knowledge.

The Great Debate was facilitated by Daléne Grobler, PPM executive consultant at Project Portfolio Office, who is also the chairperson of the Cape Town PMO Forum. She introduced the three topics to be discussed as the following:

First topic: ‘Documenting lessons learned on projects is a waste of time’

According to Grobler, project success rates have not improved over time. “Surveys seem to highlight the same results and issues, and organisations just cannot afford to keep making the same mistakes on projects over and over again,” she explained. “The concept of lessons learned has been around for some time and has evolved into a more formal and structured management practice. However, there are still very few PMOs and project management units that have this critical knowledge base in place – and if it is in place, it is not referenced frequently.

Grobler queried if, in a world where things change extremely rapidly, the lessons of previous projects do actually remain relevant, or whether new challenges emerge instead, that need to be dealt with.

Once opened up to the floor for debate, the designated speaker for the argument noted that documenting lessons learned on projects is indeed a waste of time, because too frequently, there is no repository for the detailing to take place, and that even when there is such, the managers don’t have time to read them. “Any lessons learned are not getting to the right people,” was the conclusion.

Jelley advised: “Project Portfolio Office’s viewpoint is that lessons are important, but sharing the lessons among the business and specifically the PMO is key.”

Second topic: ‘Benefits realisation is not the responsibility of the PMO’

“Benefits is the primary reason for choosing to invest resources, both money and resources, to deliver a project. Can or should the PMO be held responsible for the realisation of benefits?” said Grobler by way of introduction to this issue.

“On the one hand, I believe that the PMO’s main responsibility is to set the standards for benefits management, facilitate agreement of benefits profiles and benefits realisation plans, and track benefits on behalf of the business by collating or compiling reports, noting that the sponsor is held for overall accountability of benefits management during the whole lifecycle of the project.

“On the other hand, the reality is that once a project is done and dusted, no matter how good the sponsor is, the focus shifts to business-as-usual. Even with the best will in the world, sponsors are typically too busy to give any attention to the tracking and communication of benefits,” she explained.

This issue stirred up lively debate. Those in agreement with the statement noted that the PMO doesn’t own the product and therefore doesn’t have final control, and that a distinction needs to be made between being held accountable versus being held responsible. Some in this camp pointed out that the project sponsor was answerable for the business case, while the PMO was merely a strategic enabler for the business.

Those against the statement clarified that the PMO is an agent for change. Their argument was that, unless you are realising the benefits, your project was not a success. They stated that the PMO holds accountability for making sure that the reviews are held, and that the business is accountable. Their conclusion was that the PMOs are therefore ultimately responsible for the actual realisation of the change.

Jelley noted, “At Project Portfolio Office, we believe PMOs should get more involved, and when we refer to the first PMO Insights Report, which was released earlier this year, it is clear that business wants us to do so.”

Third topic: ‘The methodology used for project delivery does not influence project outcomes’

She added, “I do believe that the delivery method can influence project outcomes – but at the same time, I don’t maintain that it is the only factor influencing success. There are many other factors that influence project outcomes, such as the culture of the organisation, governance and decision making in the business, the behaviours and capabilities of the people involved in executing projects, and so on. So perhaps we should stop and rather try to understand the DNA of our organisation and how it contributes to, or hampers, project success.”

Opinion around the room was divided on this topic. There were those who were strongly in agreement with this statement, and thought that historic examples (such as the building of the Egyptian pyramids and the medieval cathedrals in Europe) proved that passion, a strong culture and buy-in, and a presumed lack of red tape would assist in the completion of a successful project. ‘You can deliver without a method as long as you have a way of doing things’, was the summary.

Opposing this viewpoint were those who felt that it was important to define what was meant by method, and that the chosen method can certainly influence the project – even if it is not the only factor. ‘A methodology is a framework that allows you to operate according to a predictable pattern. It doesn’t matter which methodology is chosen, necessarily, but there should be a method,’ was the conclusion of this speaker.

“We have been able to note, from the results of the first PMO Insights Report, that local businesses do have confidence that effective PPM practices are essential to success,” commented Jelley. “We are therefore encouraged to realise that organisations within South Africa are seeing value from their investments in improving PPM practices – even though more work remains to be done for PMOs to be recognised as trusted, strategic partners to the business. “In the end, project management disciplines are an important cog in the overall business team, and this is why Project Portfolio Office is involved in hosting these quarterly forums, which enable project management professionals to discuss topical issues on a regular basis, and together contribute to viable solutions. PMO leaders and executives are therefore well advised to attend these forums, both in Cape Town and Johannesburg .The issues such as the three debated at this event prove, once again, that discussion and knowledge transfer are key in the ongoing quest to achieve successful project delivery and keep our profession growing and viable,” he concluded.